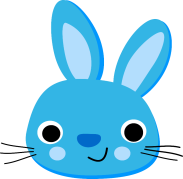 When he was only a white bunny, Bobby used to live in the woods with his other bunny friends. His closest friends were Homer, Janice, and Tommy. They would play together every day. They would play many games, but their favorite was hide-n-seek. That was ever so much fun.

On that day, as Janice covered her eyes and counted to one hundred, Tommy and Homer hid in their usual places. But Bobby went deep into the woods, farther than he had ever gone before. His mommy would have been so worried about him if she had known how far from home he had traveled.

After a while, he came to an old fallen-down-and-hollowed-out log in a quiet glade. I can hide in there and Janice will never find me, thought Bobby. So he hopped into the log and made himself comfortable. It was cozy. It was so cozy that after a while, Bobby started to get sleepy. I’ll take a short nap. Then I’ll go back and surprise them all. How all the other bunnies will cheer when I hop into the clearing after Janice has given up looking for me. These were his thoughts as he fell asleep.

The next thing Bobby knew, it was nighttime. He had slept longer than he had intended, and he was afraid. It was too dark to find his way home; he missed his mommy. He wanted to cry, but decided he would be a big bunny and not cry. He would wait for the sun to come up and then he would scamper home as fast as he could.

When he awoke this time, the sun was out and the birds were singing. It was a beautiful day. “Oh, good! Now I can go home,” said Bobby.

“What is this?” Bobby wondered aloud. There was only one way to find out, he would have to leave the safety of the log. The voice did not sound scary. In fact it was quite a pleasant voice, so he made his way out into the sunshine.

There, before him, stood the biggest bunny he had ever seen. And to top it off, he was pink in colour! The bunny was stirring something in a big black kettle. And there were many more kettles spread throughout the glade.

Bobby was about to turn and run away when the pink bunny said, “I was wondering when you were going to wake up, sleepyhead.”

“You knew I was in the log?” asked Bobby.

“I surely did, but you were sleeping so soundly, I thought I’d leave you alone for the time being.”

“What are you doing?” Bobby wanted to know.

“I’m getting the colour ready for my eggs,” was the bunny’s reasoned response.

“It doesn’t matter. Now, come and give me a hand. I have to mix the next colour.”

The Easter Bunny walked over to a kettle and lifted what looked like a heavy sack. He poured the contents into the pot. “You stir this while I go on to the next one.”

“I’m sorry, sir, but I have to go home. My mommy will be worried about me.”

“It’s been nice meeting you, sir.”

“Yes, yes. Now be on your way. I’m running late, and this year I have much work to do.”

Bobby turned away and hopped down the trail. But an hour later he was back. “I can’t find my way home. I’ve gone too far. I’ve never been this far into the woods before.”

The Easter Bunny sighed. “I will see that you get home, but first you must help me. Pick up a stick and stir that kettle over there,” he said pointing to the biggest kettle of the lot.

“It’s a little too high for me to reach,” said Bobby.

With another sigh, the Easter Bunny went over and opened a short step-ladder that was nearby and put it next to the kettle. “Here. Stand on this, and make sure the colour is thoroughly mixed with the water. There is nothing worse than spotted eggs.”

Bobby climbed to the top of the ladder and started to stir. Then he asked, “How long do I do this?”

“Until I get back,” answered the Easter Bunny. Then he added, “I won’t be long. I have to get the eggs.”

Bobby was warming to the task. It was fun to watch the colour swirls as they mixed with the water. His attention was so fixed on what he was doing that he did not notice he had moved a little too close to the pot. When he did notice, he tried to take a step back, but he lost his balance and fell into the kettle. That was all right; the water was not hot, but the edge was too high for him to reach. He yelled for help, but there was no one there to hear him.

In a few minutes, the Easter Bunny returned and saw the splashing in the kettle Bobby was supposed to be tending. He peered over the rim and saw a thoroughly soaked Bobby swimming around in circles.

“Can’t I leave you alone for even a minute?” the Easter Bunny asked. And without waiting for an answer, he reached down and pulled Bobby out of the water.

The Easter Bunny gave Bobby a towel and told him to dry off. “And sit over there, out of the way. As soon as my eggs are coloured, I’ll see you home.”

A few hours later, Bobby was standing in front of his burrow waving good-bye to his new friend, the Easter Bunny. When he went inside, he saw his mother standing at the sink and he called to her. She turned to him—and dropped the plate she was washing. His brothers and sisters snickered and laughed. “What is it?” he wanted to know.

“Look in the mirror,” said one of his brothers.

And so Bobby did look in the mirror and was surprised to see a very blue bunny staring back at him. It had been the blue dye kettle he had fallen into.

From that day onward, everyone called him Bobby the Blue Bunny. And when he grew up, he became known as Bobby the Big Blue Bunny. It was then that he stopped playing hide-n-seek. Being big and blue, he was always too easy to find.