She passed him every day. He was young, well built … and he was handsome. Just her type. She had tried everything to attract his attention. She had dressed provocatively, she had loitered, she had even taken a pratfall hoping he would come to her rescue, but some busybody stuck his big nose into her business by helping her up from the sidewalk where she lay waiting for Mr. Right to come to her aid.

In desperation, she came up with a plan. It centered on his profession. She would make some work for him and be there when he arrived. Then let him ignore her!

The plan was daring. A few blocks from where she saw him every day was an abandoned building; she would simply set fire to it and wait for her dream man to come to her.

You see, he was a firefighter. She walked past the firehouse daily, and that is where she saw the love of her life talking to his mates—paying her no mind.

The fire had spread fast and became larger than she had envisioned. But she stayed in place, awaiting her man. Finally he came. Now she could show herself at the window.

There he was—just below her—only a few feet away. His arms were reaching out to her and he was telling her to jump. You bet I’ll jump, big boy—catch me!

As she was in mid-air, and halfway to his waiting arms, she thought, “There must be an easier way to meet a man.” 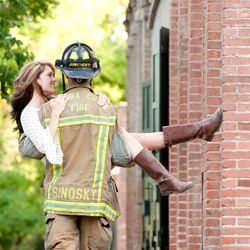