There are many antagonists in Resolution. Here are three of the more prominent: 1) Murderers, 2) Wolves, and 3) the most dangerous—the extreme Yukon cold when it’s seventy degrees below zero.

Huck, tiring of the conversation, picked up the bottle and filled his and Molly’s glasses. Jass’ was still full. “Alright, Mister Knight, how do you plan on doing it? Take us out back and shoot us?

“I must say you are taking this like a gentleman. No crying or begging for mercy?”

Huck looked at Molly and nodded.

She stood with such force that she knocked her chair backwards and it started to fall. She had her gun out and in her hand before the chair hit the floor. The scraping noise of the chair as Molly stood turned the men’s attention from the gold to the table. It was the last act of their lives. Molly had a bullet into each one of them before they knew they were dead.

The two-legs are just ahead. The three females fan out to attack on the left—to drive the two-legs to the rear, where the males await. The pup, in happy anticipation, watches and learns the way of the hunter.

“Here, Molly, take the pistol! Jass! Get back-to-back with Molly and get ready with one of your crutches. You may have to use it as a club.”

Bright was itching to fly into the grayness and have at the interlopers, but Huck ordered him to stay put. So far, the dog had done as he had been told. Just then, a wolf shot out of the fog and snapped its jaws an inch from Huck’s arm. Bright did not wait for permission. He was off the mark and had his jaws clamped on the wolf’s neck before Huck could react. The wolf was bigger and stronger than Bright and easily shook him off. Then it started to melt back into the icy mist, but before it was completely swallowed up by the frozen vapor, another wolf attacked. It snarled and snapped at Molly, but did not go in for the kill.

Molly couldn’t get off a shot because she was afraid of hitting Huck or Bright. Huck went to her side, handed her the rifle, and took the Colt. But before he could use it, the wolves were gone.

“Why didn’t they finish us off?” stammered Molly.

“They’re trying to drive us back a ways. The rest of the pack must be back there. But we’re gonna fool ’em. We ain’t movin’,” answered Huck. 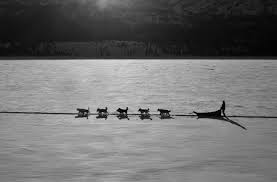 Huck was quite a sight. Black scabs from frostbite dotted his face. And in other places, the flesh was purple where the skin was just beginning to die. His brows and beard were covered in a fine white frost.

He had no idea how many miles he had covered since leaving Molly and Jass. But he did know that he wasn’t going to cover many more. He wasn’t even sure how many days he’d been gone from them. He was as played out as a man could be and still be alive. He was starved, frozen, and so tired that it took all his will not to lie down in the snow and just give up.

On his next step, he stumbled and fell headlong into the waiting and beguiling arms of The White Death.