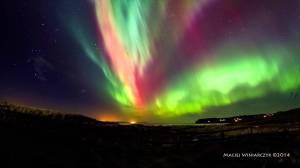 They swung out onto the river. The snow was deep enough to protect the dogs’ paws, but not too deep to inhibit movement. The northern lights were playing havoc in the night sky. Huck stood on the runners, hung on tight to the handlebars, and threw his head back to enjoy the wondrous sight as the miles passed under his sled. If we weren’t running for our lives this might be enjoyable.

Neither Molly nor Jass spoke as the dogs strained in their harnesses. Huck’s face was caked with ice. He rubbed his nose and cheeks frequently to bring the feeling back. Frostbite turns the skin black and leaves deep scars. If he lived to see Circle City, he wanted to be his old handsome self. Then he laughed at the thought as the lights over his head turned from green to white, then spun clockwise, exploding into every hue in the rainbow. “Come on, Bright, make them miles,” he said aloud, but not loud enough for anyone to hear—as they ran for their lives.