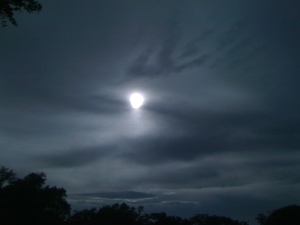 They are always with me. At times, they appear out of the ethereal mist and at other times they speak directly to my mind. I wish they would leave me to myself, but that they will not do. No, first I must do their bidding.

They come at night and stay until the black sky fades to gray. When the stars leave the sky and the clouds to the east turn pink, I am allowed to rest. But I ask you, what respite can a murderer have? At their behest, I have killed again this night. And I will continue to kill until they go back from whence they came.

I remember the first time they came to me. It was a little over a year ago and since then I have killed twenty-nine people. Please do not think me insane. I assure you these beings are real and are not immanent. At first, I too thought myself demented when they stood before me telling me they came to save the human race, and to accomplish their mission certain people must die. They explained that the demise of the race was not imminent, but if action was not taken, and taken soon, it would be too late to set things on a course to ensure the continuance of mankind.

You are probably wondering, if you do not think me crazed, why they cannot do their own dirty work. And it is a good question, one I have asked. They, of course, are not of our time and space. They appear, when they appear, as diaphanous specters, they cannot manipulate physical matter. Thus I have become their instrument here on earth. Where or when they are from I do not know. And why, out of all the billions on this planet I was chosen, I know not. But it has been a long night and I must sleep. I will continue this at a later date, and continue it I shall, for I want there to be a record of my actions and the reasons for them.

I am back. It has been two days since my last entry, and tonight they had me kill again. That makes thirty people, thirty innocent people—men, women and children, I have dispatched from this world. Yes, I am sorry to say that they have had me kill children. However, I was told that after tonight there would be no more need of my services, the human race was safe for the foreseeable future.

I refer to my tormentors as they or them because I do not know what they call themselves. Their form is vaguely human, two arms, two legs, and a head of sorts atop a torso, but their gossamer appearance precludes calling them human.

Tonight’s victim was a man in Moscow. I was directed to him and given his name. I then set about their business. I was told that his son, yet unborn, would one day invent something that would cause the death of billions. Being told the basis for this particular death was a departure from the norm; I had never been given rhyme nor reason for any of the others. The man’s name and the names of the other twenty-nine, with where and when they died, are in the addendum attached to this missive.  I remember every one of my quarry.

I guess I should have mentioned this earlier, but my victims were scattered around the world. I do not know how they did it, but one minute I was in my room behind a locked door and the next minute I was standing in a foreign locale with the name of that night’s victim swirling through my brain. Then into my mind came the place I could find him or her in the city, town or hamlet.

Now, the thirty-first person will die. They, at last, have left me to myself. I am now free to end this the only way it can be ended, with my death. I’ve been saving and hiding my medication for quite a while now, there is enough to kill me three times over. May God have mercy on my soul.

I affix my hand to this document this 30th day of June in the year of our Lord 2011.

When Dr. Allen had finished reading the above, he turned to Dr. Harris and said, “Interesting, but why have you brought it to me? We both know that the man was a certified, delusional schizophrenic. How long have we had him here at our institution?”

“Well there you have it. It’s too bad he took his own life, it doesn’t help our reputation any, but these things happen.”

“Yes sir. However, there is something I think you ought to know.”

“I’ve taken the liberty of investigating a few of the names on Fitzgerald’s list. It’s taken me three weeks, but I’ve verified eleven of the deaths and their time and place. They all correspond with what Fitzgerald has written.”

Dr. Allen straightened in his seat, glanced at the papers in his hand, and then looking Dr. Harris in the eye, very forcibly said, “Preposterous! If there is any correlation, he read of the deaths in the newspaper or heard of them on the television.”

“Excuse me sir, but Fitzgerald had no access to newspapers. He was denied them because they would agitate him to no end. And the only television he had access to was in the day room where the set is perpetually tuned to a movie channel.”

“That still does not give credence to this fairytale,” said Dr. Allen waving the Fitzgerald papers at Dr. Harris.

“No sir, it does not. However, there is one thing I think I should make you aware of. My sister is married to a Russian physicist, speaks fluent Russian and lives in Moscow. I called her about the last name on Fitzgerald’s list. She made a few calls for me and it turns out that Fitzgerald was dead before the body of the man he mentions was discovered. And just one more thing sir, the man’s wallet was found in Fitzgerald’s room. I have it if you’d like to see it.”

Turning a color red that is not in the spectrum, Dr. Allen shouted, “NO! I DO NOT WANT TO SEE THE DAMN WALLET!” And then handing the Fitzgerald papers to Dr. Harris, he said with ice in his voice, “Burn these, burn them now. And if you value your position here at Oakwood you will never speak of this matter again, to anyone. Do I make myself clear?”

Dr. Harris accepted the papers, and with a meek, “Yes sir,” walked out of the room. When he was in the hall, and by himself, he let out with a, “I’ll be goddamned, the old bastard is afraid.”

But Dr. Harris did not burn the papers. He placed them, with the wallet in his desk drawer and then locked it. He had some thinking to do. And as he started on his rounds, a quote of Shakespeare’s kept repeating itself in his head. “There are more things in heaven and earth, Horatio, then are dreamt of in your philosophy.”