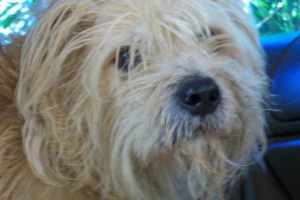 Hey guys … it’s me Danny your favourite dog. I’m hangin’ out just listenin’ to Willie sing a little Kris. My human, Andrew, doesn’t get it, he doesn’t know that Kris and Willie are speaking for God. Have you ever listened to “Sunday Morning Comin’ Down?”

Andrew is off the boat … gettin’ in trouble no doubt. Me, I’m listenin’ to Willie.

I love to ride in cars, don’t you? Sticking my head out the window, barking at any dogs I see along the way … I can even put up with Andrew when I’m riding in a car.

So this is what I wanted to tell ya. Two days ago Andrew took me out to his car and opened the door and told me to get inside. Normally I wouldn’t do what he wanted. But a ride in the car … so I jumped in. I didn’t know where we were going, but as long as I could stick my head out the window I didn’t care.

It was a Sunday morning, the roads were empty, and it was a good thing because Andrew was a little worse for the wear. He had had a rough Saturday night and he was still a little tipsy. And just like in the song, he stopped by a church and we listened to the choir.  It was then that I knew what Kris meant when he wrote, “There’s something in a Sunday that makes a body feel alone.” Because I saw it in Andrew’s eyes that Sunday morning. It was indeed a Sunday morning coming down.

I thought, “You need more than a beer pal, you need help.”

We were still by the church and a lonely bell was ringing … and Andrew was wishing he was stoned. just like in the song. Friggin’ humans!

I knew that the only thing Andrew cared more about than getting high was me. So before he could start the car and go looking for booze on that Sunday morning, I jumped out the window and took off, knowing that he would chase after me. As long as he was focused on me he’d not dwell on … his Sunday Morning coming down.

I’m sorry to say he caught up with me right away and then we went and bought a six-pack.

It was indeed a Sunday Morning coming down, and it came smack down, right on the head of my human.